28 Oct A hearty pumpkin soup with pork and pearl barley

I know that hearty soups without meat do exist (I’m sure they do), and I certainly do not feel the need to eat meat every day of the week, yet I have found that the addition of meaty goodness is what constitutes a hearty soup for me personally. At the risk of sounding like a witch, I always like to boil a good carcass. To make my own stock or as a soup base. And I get 2 carcasses for £1 at Ginger Pig, so it’s a small price to pay for the depth that it will give a dish. I also bought some good quality lardons from them (by good quality I mean from happy pigs, which is the only kind I like to eat), so this soup is more than a little meaty 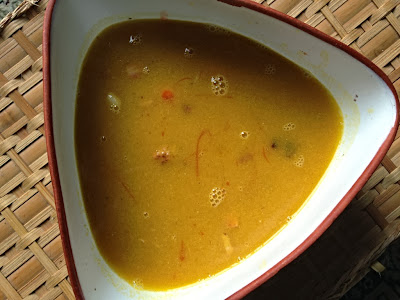 Start off by making the chicken and onion stock – boil a couple of carcasses with a peeled onion and some salt for 2-3 hours. You can add a bay leaf in there if you have one, I didn’t. Meanwhile, roast the pumpkin, in chunks, with some olive oil and salt, for about 20min. It’s much easier to peel then. Drain the stock into a new pan, so that you are left with a clear liquid. Add the pumpkin chunks and any meat that’s on the carcasses to the clear stock and allow to cool. Blend. Pour it back in the pan, season with garlic salt, black pepper and nutmeg, then add the pearl barley and bring back to the boil. Simmer until pearl barley is ready (about 30min). Chop the lardons up if they are quite big, like mine were, then fry until crispy. Add to the soup. Deglaze the pan with the soup to get all the flavour off it. Add chilli sauce if you like it spicy 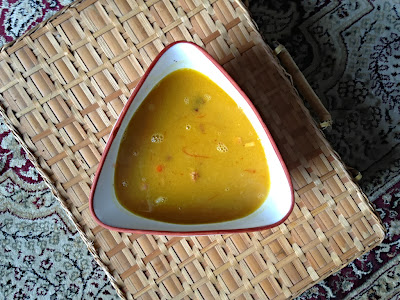 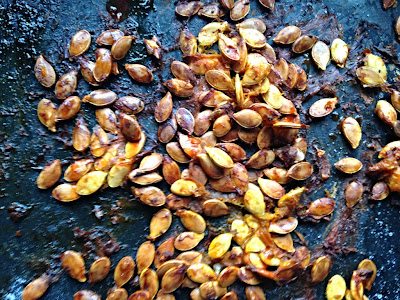 As for the seeds, you may want to roast them for an hour with some salt and a little olive oil. Half way through, sprinkle with a little soya sauce and chilli sauce for an amazing beer snack. I like to leave a bit of the pith on there too as it turns brown and crunchy