There are few foods in this world that are quite as sexy as French toast drizzled in honey. Yet the dangerous voluptuousness of the classic recipe has made it a once-in-a-blue-moon treat. So imagine my glee at discovering that French toast can be made healthy without loosing its sex appeal. The replacements were simple: wholemeal bread instead of white, coconut oil instead of butter. Then to up the flavour stakes: plenty of cinnamon and vanilla, and a pleasant maltiness added by my superfood of the moment, maca powder 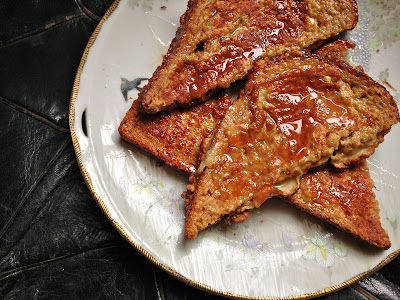 Beat the eggs with a fork on a large plate; add the cinnamon, maca powder and vanilla essence and keep beating until smooth. Halve the bread, and dip each bit in the eggy mixture, covering both sides well, before frying in hot coconut oil. When golden and crispy on both sides, remove from heat. Drizzle in honey and sprinkle with a tad more cinnamon before serving. For 1 slice of bread you will need 1 egg, 1/4 teaspoon each of cinnamon, good quality vanilla essence and maca powder