Posted at 22:00h in Uncategorized by zuzazak

Vegetarians look away now – it’s shooting season in the UK and the butcher shops are full of pheasant, partridge, grouse and wild rabbit. I am typing this while eating a delicious rabbit and spinach stew/soup (depending on how you look at it), the recipe for which I would like to share with you, even though it was a by-product of another dish I was making – a “huntsman bake”, for which I needed strips of rabbit. So, I was left with the bones with plenty of meat still attached, that I didn’t have the will to scrape off with my not-so-great knife. I covered these in cold water, added a couple of bay leaves, a cinnamon stick and some garlic cloves and allowed to boil for 2-3 hours, adding water as it evaporated. I then allowed it to cool, and the next day, I took the carcass out, pulling any meat off it. I brought the stock back to the boil, this time adding lots of pearl barley. When the grains were soft, I added spinach leaves, salt, pepper, a squeeze of lemon and finished it off with tabasco 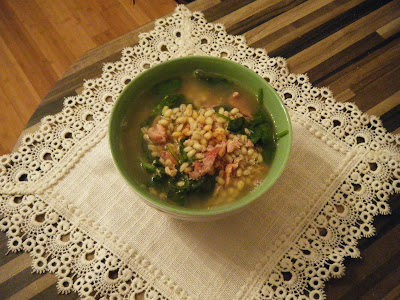 In doing research for my cookbook, I’ve been learning about hunting in Eastern Europe. A fact that made me particularly proud of my countrymen was that, throughout Polish history, women were just as keen hunters as men. One piece of poetry that I read, from the 16th Century, suggested that many men found women more attractive in this sort of pursuit than dolled up in tight dresses! This makes me happy because it feels like the ultimate liberation from stereotypes. It’s men loving women for what they are, and women being free to be what they are – natural, strong and fierce – rather than feeling forced to create a permanent ladylike illusion. There’s hope yet…