Posted at 19:17h in Uncategorized by zuzazak

Sometimes I feel like I am on a one-woman mission to popularize pearl barley. I go on and on about how cheap it is, how tasty and how good for you. But I won’t bore you with that lecture today, because I’m a bit bored of it myself now. But you know what I’m definitely not bored of? Uh-huh – pearl barley. This is another lovely recipe from Hugh Fearnley Whittingstall for The Observer. The recipe down there makes four servings 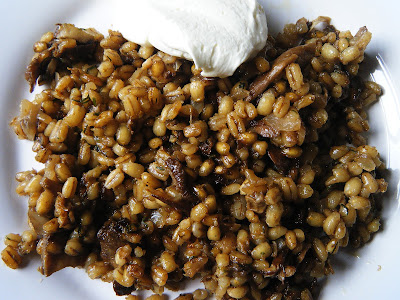 Ingredients:
30g dried porcini40g butter1 tsp olive oil2 onions, finely diced4 garlic cloves, finely sliced200g pearl barley250g closed cup mushrooms About 600ml chicken, lamb or vegetable stock2-3 tbsp chopped dill4-6 tbsp crème fraîcheSalt and pepper
You need to soak the porcini mushrooms first in hot water a few times – so pour some boiling hot water on them, then drain them after twenty minutes or so and do it again. The second time round, I poured the mushroomy water into the stock for extra flavour. Fry the onion and garlic until browned, then tip into a bowl and fry all the mushrooms in the same pan. Cook the barley in the stock until soft, but firm, which takes about half an hour. Then add the onions and mushrooms, and cook together for a bit longer, maybe ten minutes. Finally, add the chopped dill and season. Serve with crème fraîche, and – if, like me, you need your food to be just a little bit spicy – West Indian hot pepper sauce. I changed Hugh’s recipe minimally, as I didn’t add the white wine which he suggested but used lots of the porcini mushroom juice instead. As I don’t want to launch into another tirade of pearl barley glorifying, I will stop right here
The font has come out so small on this post for no apparent reason…