22 Nov Three things to do with brussels sprouts

Posted at 23:15h in Uncategorized by zuzazak

You know you’re ill when you nearly cry in the supermarket because you are faced with what seems like a ridiculously large choice of honeys, and all you want is just one of them, but you have no idea which one that is. OK, so decision-making has never been a strong point of mine. Anyway, I’m surprised that I got ill in the first place (it’s really not fair), as I have been looking after myself – drinking my white tea (not the milky stuff), not partying too hard, and eating loads of healthy stuff, such as brussels sprouts. Which is what today’s blog is about. I am trying to reinvent the humble brussels sprout. And I think I’ve done a pretty good job, even if I say so myself. My favourite was the salad, but we’ll get to that in a bit. First, there was the risotto… I made this for some friends and it feeds four 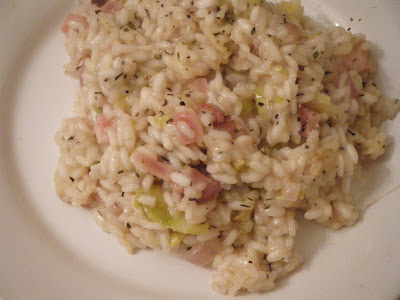 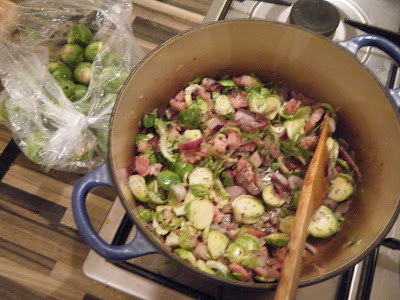 It’s dead simple to make – just fry the onion and lardons for a couple of minutes first, then add the brussels sprouts and thyme and carry on frying for another 7-8 minutes. Add the rice, stir it in, followed by the cider. Keep stirring (in one direction if possible but no need to be too religious about this, sometimes it’s just too hard). Once the cider has evaporated, start adding the stock, bit by bit, as usual with risotto, until it’s cooked and the rice is soft but not mushy. Somewhere in the middle, season with salt and pepper. Finish off by stirring in the parmesan shavings, squeezing in the lemon and adding more black pepper 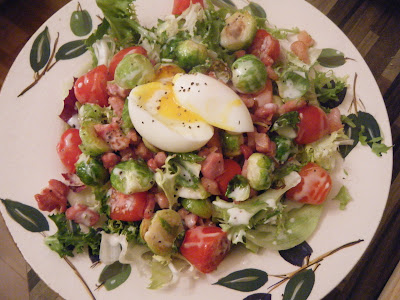 That salad up there was amazing, it reminded me of the sort of warm salads in you get in Parisian brasseries, that are a complete meal in themselves. I used some prepared, crunchy salad leaves, and made a dressing out of olive oil, lemon juice, mayo and salt and pepper. I fried the brussels and lardons for about 10 minutes until they were nice and brown and slightly crispy, chopped some lovely tomatoes into the salad and cooked an egg for 3 minutes, so that it was soft boiled. Finished it off with more black pepper, et voila! 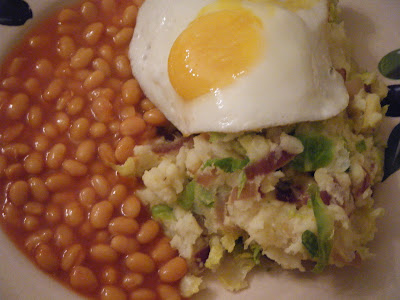 And finally the good ol’ English classic – bubble and squeak, served with baked beans and a fried egg on top. I made that for my Polish cousin today, who lives in Greece and hasn’t have the chance to sample such delights before. She actually loved it. Well, who wouldn’t… so I fried a red onion and the brussels until crispy and made the mash with maris piper potatoes, butter, a little bit of milk, and sea salt. I also used a spring of rosemary from my garden and a little bit of turmeric to add some more flavour to the veg. For anyone reading that does not live in the UK, you combine the veg with the mashed potatoes. Traditionally, bubble and squeak is made with cabbage – but really you can use anything you want that you have leftover – and is the perfect comfort food