Posted at 15:04h in Uncategorized by zuzazak

I found this recipe in the Guardian weekend supplement that someone had left on the train and liked the simplicity of it, as well as the photo, which made it look very tasty and just like the sort of thing I like to eat at this time of the year. I also liked the idea of using pearl barley, because I hardly ever cook with it, and did you know that it only costs 37p for a big (500g) bag?! I tried to follow the recipe as best I could, but of course I had to make some additions and substitutions. Hugh’s recipe does not use beer, or paprika, for example. As I did not have neck of lamb with the bone in it, I used a lamb stock cube. And I decided to just add the pearl barley to the stew, rather than cooking it separately. I also didn’t use anywhere near as much butter as Hugh suggests for frying the onions 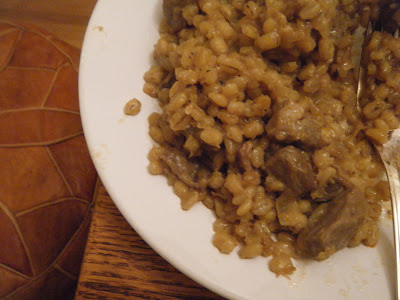 So I fried the onions in the butter for about 20 minutes, then tipped them into a bowl and reserved. In the same pan as I had just used to fry the onions I browned the seasoned lamb chunks in olive oil, for about 5 minutes, before covering with cold water (there was about an inch of water covering the meat), adding the bay leaves and bringing to the boil. Once it was boiling I turned the heat down and allowed it to simmer slowly. At this point, I added the stock cube, a pinch of paprika and the cinamon. It cooked for about an hour. Finally, I added the pearl barley and cooked for a further half an hour. When the barley was soaking up all the liquid, I started adding the beer, bit by bit. I refried the onions near the end, until crispy, and then added these to the stew. I ate this for dinner the night I made it, and the next day my brother came round and I warmed this up, adding a bit more beer while it was heating, to keep it all moist and stewey, and we ate it washed down with more beer. As it’s a dish of Turkish origin, next time I may have it with the Turkish drinking yoghurt that I buy from my local shop – yum! Anyway, thanks to Hugh I have another simple and delicious dish to add to my repertoire, I highly recommend
Ingredients
2tbsp olive oil
50g butter
2 onions
700g cubed lamb
Lamb stock cube
2 bay leaves
200g pearl barley
1tsp cinamon
Salt and pepper
Half a pint of beer
Pinch of paprika