Posted at 19:42h in Uncategorized by zuzazak

I’m terrible at break-ups so I am pretty much in hell right now. However, I need to remember these things do happen, and life goes on. I am lucky that I have the support of my unconventional but loving family, and loyal friends. My aunt called from Holland yesterday and we had a two hour conversation about life and love. During this heart-to-heart, I learnt that some people don’t know how to suffer, and also, that I need to find people who are on my wavelength (or “spiral” as she put it), who are, above all, sincere, because that’s who I am. According to my aunt’s “spiral” theory, I am starting a new spiral now, even though it doesn’t feel like it, everything is destroyed so I need to start building again, starting very small, like a snail, she said. All very strange, but it has made me feel more positive nevertheless. As well as my support system, I have cooking, which may just be the tool to drag me out of this hole. Yesterday, I made “schabowe”, which are basically breaded pork cutlets, or schnitzel, and they turned out great, so things can’t be as bad as they seem…we decided to go against the “schabowe” recipe in the old Polish recipe book, as they overlooked the breadcrumbs, which, to my family, would be a complete travesty 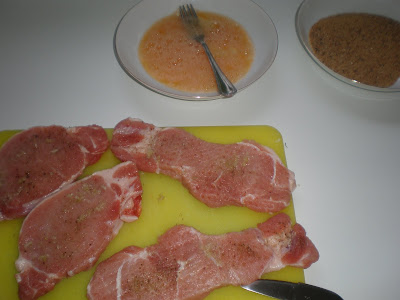 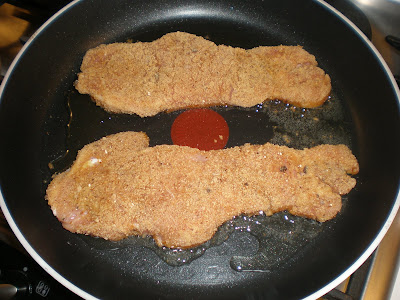 We start off by making the salad, as it needs some time to “bite together” as you say in Polish. We slice the cucumbers and whichever onions you decide to use as thinly as you can get’em. Squeeze over some lemon, cover in salt and pepper and the sour cream, which has been mixed with a teaspoon of sugar. Put the potatoes on to boil, and go have a glass of wine. After about fifteen minutes come back, put the meat in a plastic bag and beat, so it flattens out and becomes tender. Massage the salt, pepper and crushed garlic into both sides. Beat the eggs in one bowl and put the breadcrumbs in another. While the oil is heating up, dip the cutlets in the egg, then the breadcrumbs and fry for about 7-8 minutes each side. The thinner they are the better, I think we could have beaten ours a little more… 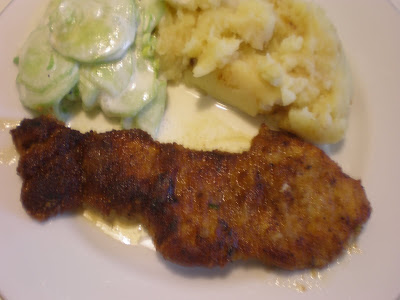 Now, all that needs doing is the potatoes – you can do these while the pork is frying or, if that’s too much then put the meat in a warm oven once it’s done (pouring the oil from the pan over it so that it doesn’t dry out) and do the potatoes then. Once the potatoes were mashed with the butter and milk, my mum put them in the same frying pan where we cooked the meat, so that they soaked up any left-over juices – this was a great idea, as the potatoes ended up with a richer, meatier taste. But this is completely optional. Et voila, a typical Polish dinner!