Summer is here in every sense.  I often feel that life has different stages just like the seasons. Spring is childhood. My Spring lasted a long time. I have been somewhat of a late developer and chose to act like a child for most of my twenties – playful, irresponsible, irreverent. I don’t regret it, my life has been a lot of fun, yet I was also ready for change when it came. Now, it’s harvest time – my life feels bountiful and abundant, yet at times also overwhelming. I imagine that is just how farmers have felt over the years at harvest time – grateful and a little bit tired with a constant, pressing knowledge that there are still plenty of things that need doing. There is seldom any time to sit down and reflect, to take stock, yet stock-taking needs to happen too. Gratitude is the predominant emotion, because the harvest has been plentiful and the gods have favoured me this year – I’ve had a wonderful baby girl, the book has been launched and many amazing doors are opening themselves up before me.

These Spiced Chocolate Martinis from my book were a snatched moment of celebration in my overgrown garden. It is a recipe from my book, yet I made them with a milk chocolate this time – much sweeter – and with less cardamon vodka. I think the recipe in the book wins ever so marginally. Whatever version you choose, it’s a delightful cocktail. It’s very simple to make, but first you need to make some cardamon vodka. We stick 6-7 cardamon pods in 1/2 l. bottle of clear vodka and leave it for 1-2 weeks, turning the bottle once a day. 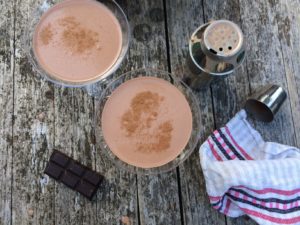 Melt the chocolate over a pan of hot water.

Take it off the heat and whisk in the cream.

Add the cinnamon and vodka to a shaker with ice cubes in it (or a jam jar).

Shake it vigorously, the strain into martini glasses. Add another large pinch of cinnamon on top.