There’s something that happens when I’m about to get on a plane. I always manage to either miss my flight or create some kind of unnecessary drama. Even when in other areas of my life I feel calm and content, the time comes to catch a flight and something inevitably goes wrong. I should be in Athens right now, but I’m not. I wouldn’t say I’m London either. I’m occupying a space in between two worlds, neither solidly in one nor the other. Like the Cheshire cat in Alice in Wonderland, I’m just not all there. Or here. Some would argue that this is a natural state of affairs for me and they’d have a point, yet at this moment in time this quality is so pronounced that I feel like parts of me could easily just disappear like they do to that cat. Yet like him, I’m quite enjoying it. I’m using this strange space to look at my life  objectively and make some small yet important changes, to experiment with how I normally do things. In my everyday life I’m often too busy in the action of doing to take a step back and reflect on how I could improve the process. There are infinite ways of doing things, why do we get stuck in one mode like machines I wonder… Some things just work so there is no need to change them, yes, but other things don’t work, yet we get stuck in a habit – those are things I’m targeting right now. One habit that I have no intention of changing for the time being however, is porridge for breakfast. That’s working out very well. There are so many variations that I can’t see myself getting bored. I made this one with amaranth grains and berries the other day. It’s a grain I’ve never used before and was a bit puzzled by, yet it turns out that it makes a brilliant porridge, less stodgy and sticky than oats. 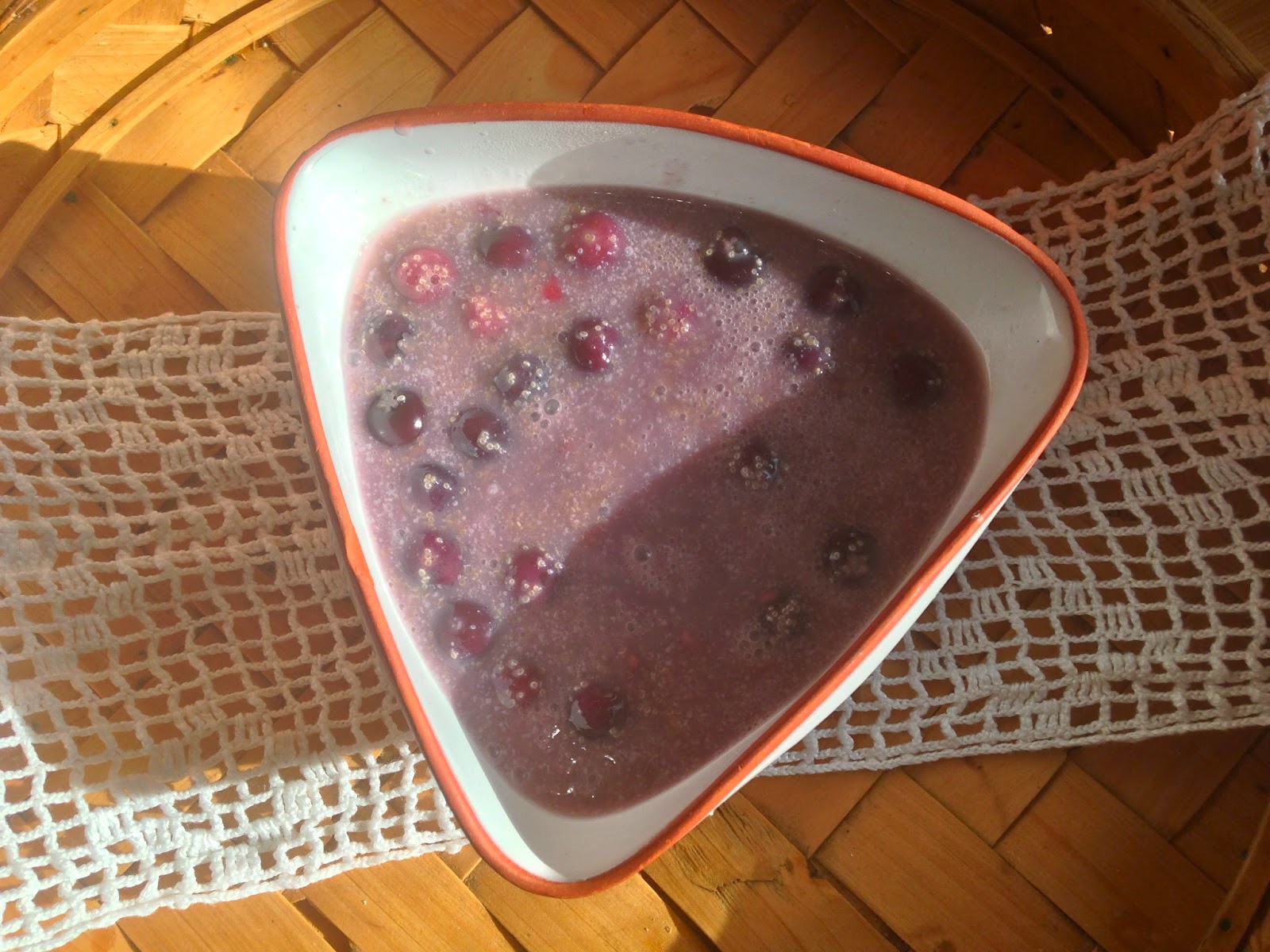 I cooked it first in lots of cold water. I’ll be honest with you, I wanted to use it for a salad, yet I quickly noticed that it was turning into a porridge-like consistency and went out and bought some quinoa for the salad instead. I think the grains are actually too small for a salad and also I cooked them in too much water to allow them to separate. But for a porridge they were perfect. So the next morning I took a spoonful of the cooked amaranth and diluted it with plenty of almond milk. I allowed it to simmer, along with a handful of raspberries and blueberries, a pinch of salt and some honey for around 10min, until the raspberries disintegrated completely. Then I  added a bit more almond milk to reach a consistency I was happy with. Amaranth is completely new to me in this form (I’ve tried the leaves before), it has an unusual taste, neither sweet nor savoury, it’s lost somewhere between the worlds just like me, so it needs strong, decided flavours that push it in either one direction or the other… I think I’ve just managed to empathize with a grain