Posted at 18:12h in Uncategorized by zuzazak

I’ve been travelling a lot over the past few weeks and eating plenty of good food, but one meal has stuck with me. I’m on the road again tomorrow so if I don’t tell you about it now, it will be lost in the vortex of delicious meals never mentioned, which would be a massive shame. In New York I was invited to dinner at Chiara’s flat. Knowing that Chiara is Italian and also a chef (at Bevacco in Brooklyn Heights if you’re interested) did not prepare me for this meal. I was eating too much to make notes on every single course, but I did manage to get the recipe for the maple pork belly, which, if you ever try it, you will be grateful for. I plan to try it myself as soon as my detox is over 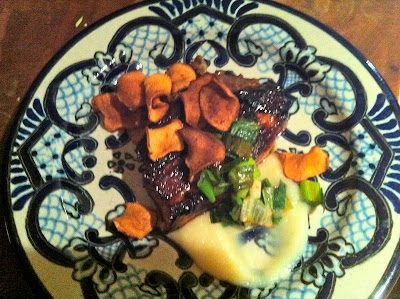 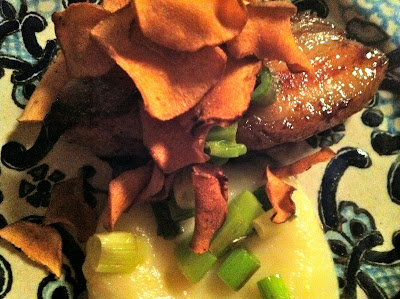 Boil the pork belly for about 2 hours (depending on how much of it you’ve got – we’re talking 6 people here) with a carrot, celery, celery root, parsnip and peppercorns. Cool and cut into large cubes. Cover in pure maple syrup and allow to stand for a minimum of 1 hour. Sear it on the pan – both sides – until it looks like that up there, brown and crispy. For the celery purée – boil the celery root until soft, then blend with cream and some of the water it was cooked in, season to taste. The dish was finished off with chopped spring onion and Jerusalem artichoke crisps. These crisps were totally addictive, and a great snack on their own. You use a vegetable peel to cut the Jerusalem artichoke into fine slithers and fry these in very hot oil
Ingredients
Pork belly
Carrot
Parsnip
Celery
Celery root,
Peppercorns
Maple syrup
Single cream
Spring onion
Jerulsalem artichoke
Salt and pepper
Oil for frying