21 Jul A stir-fry to alleviate the dreaded dampness (acc. to Chinese Medicine)

Posted at 19:04h in Uncategorized by zuzazak

According to Chinese Medicine living in a place like the UK, as well as eating processed foods and sugar will increase our chances of catching damp-related disorders. Now, I’m certainly not an expert in Chinese Medicine, but I am interested in various life-and-food philosophies. I’ve heard many people argue that Eastern medicine simply isn’t “scientific”, but the science argument proves absolutely nothing if you take into account the constant changes in science. After all, what people thought was healthy 100 years ago in the West has changed, so why would we assume that what the way that Western science views the world right now is the ultimate truth? 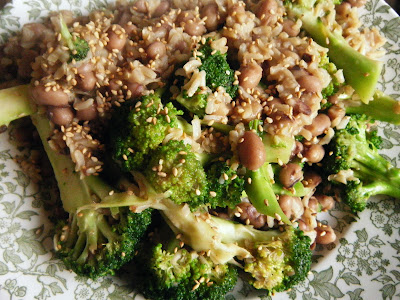 I love to experiment and experience life from different perspectives, so Chinese Medicine really interests me (though in no way do I condone or agree with any practices that involve animal cruelty – that is not a price we should be willing to pay anywhere in the world). Chinese Medicine was developed by watching the natural world, and works on the principle that everything on our planet, no matter how big or small, operates under the same set of rules. That seems pretty sensible to me. However, it was difficult to find two sources that agree on absolutely everything when it comes to the dreaded damp. What they do all agree on is that cold, raw foods should be limited, processed foods and deep fried foods avoided, and that brown rice, beans and warming spices such as cinnamon be eaten more. So I stir-fried some broccoli and garlic in a small amount of sesame oil, and chucked in some brown rice left over from last night’s dinner. I added soya sauce and cinnamon, and carried on stir-frying on a high heat for about 7min – left over rice needs to be heated thoroughly before eating (and only once). Finally, I drained and added a tin of black-eyed beans. Heat this through, squeeze in some fresh lemon and serve with roasted sesame seeds on top. It was delicious, but I made a conscious effort to eat it slowly (rather than shoveling it in as normal) and stop when I was nearly full, according to the principles of Chinese Medicine