Posted at 21:37h in Uncategorized by zuzazak
This past month has been one of the hardest in my life. Not in a horrible, traumatic way (see when I was breaking up with my ex two years ago), but in a natural, growing kind of a way. Of course, there have been times where I’ve swerved slightly into the dark and others where I attempted to be too light in order to distract myself, but those were fleeting moments and on the whole I’ve dealt with my grandma’s illness and death as honestly as I could have done. There was a time, not so long ago, when the mere thought of it made go mad with anxiety and fear, but I guess when things happen in the right time and in the right way, then life is being kind. There were a couple of things I would have changed about the whole experience if I could, so that she suffered less, but that would have meant changing certain people which is something that I clearly don’t have the power to do. So I’m trying to be understanding of the fact that everyone is damaged in some way and everyone is trying to heal (even if they are going about it in a way which hurts others and themselves) 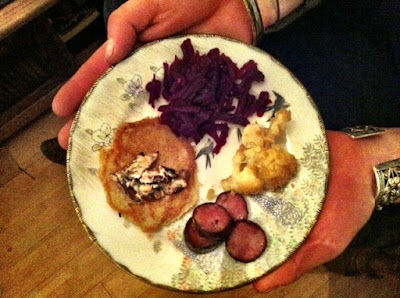 Last Friday, I had some friends round for a dinner of “przekaski” – Polish snacks. I made placki – that’s the little potato cake you see up there with some creamy mushroom topping, a spicy beetroot salad, cauliflower in breadcrumbs and grilled some dried Polish sausage which we dipped in English mustard (as much as I love mild Polish mustards, I’m addicted to that English kick). For the placki, you need to grate a couple of large potatoes and a medium onion on the really small holes of the grater – so that they are basically raw mush. Try not to grate yourself. Season your mush well before frying in olive oil until golden, about 4min each side. The mushroom topping is a mixture of closed cup mushrooms and shitake mushrooms, chopped and fried in butter, in a pan where they have room to brown. Then I added a little bit of garlic, soya sauce and some single cream. If that up there looks like a tiny portion, it’s because I forgot to take pictures of our first and second helpings and that’s all we had left by the time I remembered! 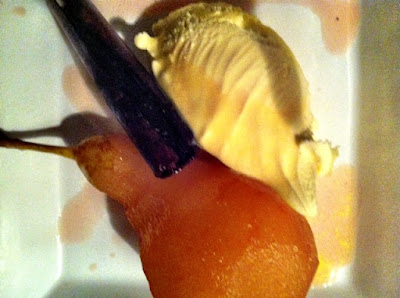 And here are the pears which I simmered in a mixture of ginger wine and cherry vodka (Wisniowka), with a couple of cinnamon sticks, for about an hour. I covered the pan and clearly left the gas on too high because before I knew it the whole thing was on fire in the most spectacular way. I wish I had thought to take a photo but we were all panicking slightly to tell you the truth, and then Tommy blew it out, thank god. I’m glad he didn’t set himself on fire, as when my dad did that once he singed his eyebrows, and Tommy has a lot of hair