25 Dec A few fishy things aka A Polish Christmas

Posted at 11:59h in Uncategorized by zuzazak

We are not a religious family. And yet around Christmas my mum likes to pretend we are, and we all like to go along with it, even though it makes no sense at all. So on Friday, were fasted. Traditionally, you fast on Christmas Eve, and the main meal, which consists of 12 dishes, includes no meat. But my mum got all mixed up and thought that it was Good Friday, so we fasted for 2 days. By fasted, I mean we ate no meat but huge amounts of everything else. By the time I realized that this year Christmas made even less sense than before, because mum had it mixed up with Easter, it was too late to stop. And I prefer fish to meat on the whole anyway, so it didn’t matter. We made this delicious fish soup, and also fish is aspic (jelly), as it’s one of the traditional dishes for Christmas Eve. The fishy jelly thing was something I always avoided until I had a delicious version a few years back at the “Palac Ujazdowski” in Warsaw, next to the Centre of Modern Art. The difference was that it had three types of fish in it, instead of one, and the jelly had a lot of flavour, which sometimes it doesn’t. Then it just tastes gross, as you’d imagine with a mildly fishy jelly. The one we made had 2 types of fish in it, and turned out really well. Though it’s definitely not for the unadventurous out there… 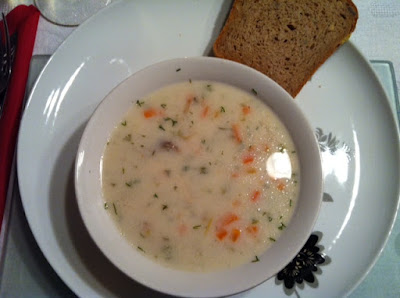 Fish Soup
Carrot
Parsnip
Leek
Celery
A whole white fish
Juice of half a lemon
Bay leaf
Juniper berries
Salt and pepper
Single cream
Bit of flour for thickening
Dill
You make a fish and vegetable stock from the carrot, parsnip, leek, celery, bay leaf, juniper berries and the head and tail of the fish – it takes about half an hour to an hour. We used the stock to cook the fish for the recipe below, then separated the stock into two bits – one for the jelly, one for the soup. Into the soup one, we added the white fish and cooked it for about 10min. Then, you need to remove the fish and the vegetables. With the fish – take out the bones, chop it into small bits and put back into the bowl. With the carrot – chop it up and stick it back in the soup, but make sure you keep some for decorating the jellied fish if you are making both recipes! Chop up the leek too and stick it back in. You can chuck the other veg.  Add the single cream. Mix about a tablespoon of flour with some water and add that while the soup is coolish, then bring back to the boil while stirring constantly. Season to taste. Add the lemon juice and dill, and serve with crusty bread 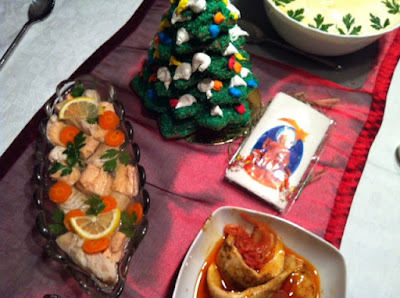 Jellied fish
Vegetable and fish stock (described above)
Bit of trout
Bit of carp
Gelatine
Cooked carrot
Parsley
Bit of lemon
Salt and pepper
Mayo or lemon wedge to serve
We cooked the fish in the stock  – the carp first for 8 minutes, then the trout for about 7 minutes, then removed them and tried to take out as many bones we could. If you can get fillets, then spare yourself the hassle of doing this, it’s no fun. Then cut the fish into little bits and place on a serving bowl in a way that looks attractive – I did little diagonal patterns as you can see up there. Add the bits of cooked carrot, parsley and lemon. Take the stock and add a squeeze of lemon. Now, stir in the gelatine. Season to taste and make sure it tastes good to you at this point. Cover everything on the serving plate in the stock/jelly-to-be, and allow to cool at room temperature before chilling in the fridge. Serve with a lemon wedge or mayo