Posted at 09:57h in Uncategorized by zuzazak

I have an easygoing cooking style, improvising on the ingredients and/or techniques more often than not. I keep in mind the millions of people that have made a particular dish throughout history and all the hundreds of people that are probably cooking it right at this very moment – each one, their own version. So when Mr. Carluccio told me there are as many pasta e fagioli as there are political parties in Italy (regrettably not in person, but through his cook book “Vegetables”), I recognized immediately my type of dish: relaxed and fuss free. They don’t have borlotti beans in Tesco? No problem, replace them with cannellini beans, for pasta e fagioli southern-style. So I improvised quite a lot with this one, and the recipe below can now only really claim to be inspired by Mr. Carluccio’s 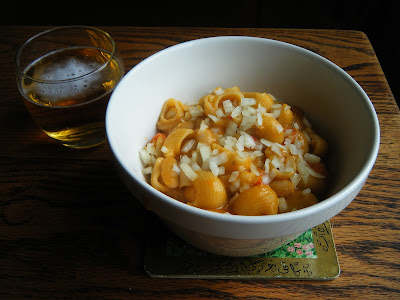 ﻿
Ingredients (serves 2)
2 x 400g tins cannellini beans
100g tubatini or lumache pasta
Garlic clove
Red chilli
100g cherry tomatoes
1 Tblsp tomato puree
Handful finely chopped fresh onion
Garlic salt
Black pepper
Puree half the beans, while frying the chilli and garlic in some olive oil, followed by the tomatoes along with the tomato puree. After a few minutes, add the bean puree and the whole beans, drained. Cover with about a pint of hot water (just over half a litre). Add the garlic salt and pepper and bring to the boil, then chuck the pasta in and cook for a further 10 minutes. Allow to rest for 5 minutes, then serve with some fresh onion on top (or hot pepper sauce)
I won’t rant and rave too much about this dish, even though I really want to – lets just say that I have made a friend for life, and like the people I love, it’s warm, comforting and generous (and no effort at all, of course). The only thing I did question is whether it could have been even better had I used tubatini pasta as Mr. Carluccio had suggested. Of course, I couldn’t find it and used lumache instead. They were, perhaps, just that little bit too big. In terms of shape, however, they were ideal, because they caught all the juices and even whole beans at times, transforming them into delicious little morsels