08 Feb Mamuska in Elephant and Castle

Posted at 23:03h in Uncategorized by zuzazak

There’s a few things that I want to write about, but as this is where I went to eat tonight and it’s fresh in my mind, I’ll start right here. Mamuska is a canteen-style place, where you order at the counter and come pick your food up when they shout. It feels a bit like being back in communist Poland – in the homely, friendly, nostalgic way, rather than the paranoid, cold, empty-shelved way… 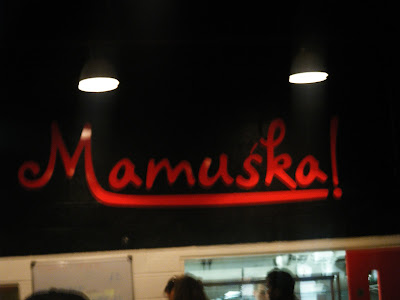 I’ve been to most of the Polish restaurants in London and Mamuska is definitely one of the better ones. It  doesn’t serve the wide variety of Polish food that I wish was represented in the UK, but it’s cool and cheap with tasty food. Of course, you can’t compare it to somewhere like Baltic (in Southwark), which is infinitely more varied, slicker and way more expensive. But if you put it next to Daquise (in South Kensington), then it compares favourably – the food is the same rustic, simple, traditional fare, and although there may be less choice here, the atmosphere is more interesting, and it’s much better value for money 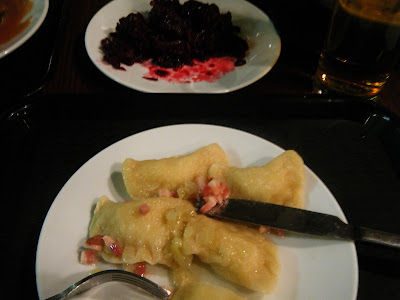 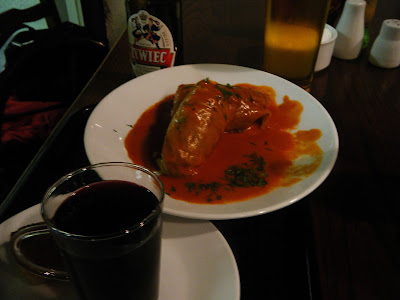 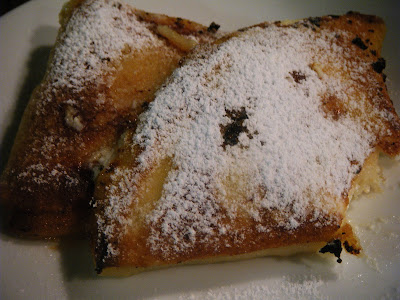 The borsht is homemade, which is rare nowadays, and I would recommend it, served with the croquette, as a starter. The “golabki”, or stuffed cabbage leaves were delicious in themselves, but served in a sauce that seemed to be a blend of Heinz tomato soup and ketchup, which I found a little odd, but not unpleasant. The best thing, however, was the desert up there – pancakes stuffed with a sweet cheese mixture – something a bit like mascapone. It’s one of my favourites, and was executed brilliantly. Well worth breaking my “no sugar” rule for!