Posted at 22:35h in Uncategorized by zuzazak

“Chlodnik” is the Polish “gazpacho”. Instead of tomatoes we use beetroot, however, as well as plenty of yoghurt. It’s perfect for hot days, and once you make it, you can keep it in the fridge for days. We ate it with boiled eggs, but it is equally good with refried potatoes 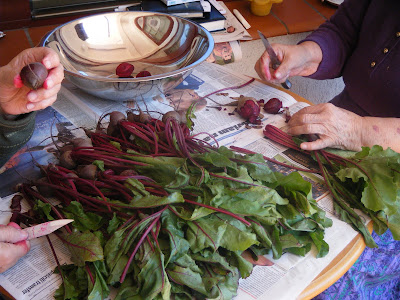 That’s my two lovely grandmas preparing the beetroot. You need to use young beetroot for this, therefore it’s a very seasonal soup. We use both the beetroot themselves, peeled before boiling, as well as the leaves and stalks. If you can’t get the stalks, however, then, my grandma assured me, you can leave them out of the recipe without causing too much damage. I’m afraid that I can’t give you the exact quantities we used. The amount of beets we used, up there, and the other vegetables, below, made about fifty servings, at a guess. I’d say just use any quantities you want and experiment, until you get the texture and flavour you are happy with 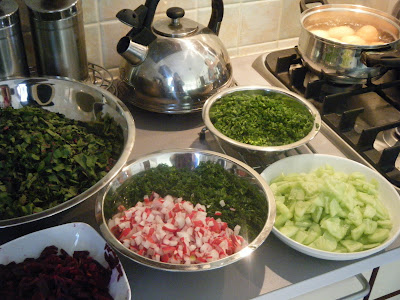 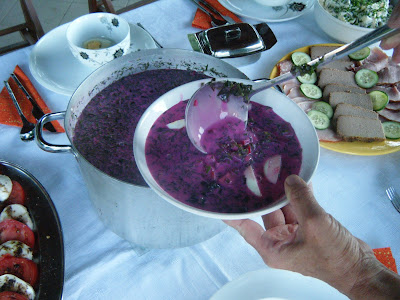 You make a vegetable stock out of the carrot, parsnip, leek, celeriac, and chopped beets. After about half an hour of cooking time you remove everything from the boiling water, and throw it all away except the beetroot (you can use the cooked veg in a russian salad if you don’t want to waste them). Now, you add the finely chopped stalks and leaves and cook for a further 20 min. Once cooked, you let the soup cool – it could take up to two hours. Finally, you add all the other ingredients which have been finely chopped beforehand, as well as the sour cream and yoghurt, which have been blended together. Put this mixture in the fridge for another hour or so before serving. This soup is incredibly refreshing and even though this was the first time I had made it on my own, everyone who stopped by the house and had a bowlful, praised it wholeheartedly. I don’t think this is because my chlodnik was better than anyone else’s, it’s just a soup that you can’t fail to appreciate in the 40 degree heat