Posted at 10:10h in Uncategorized by zuzazak

I love eating outside! The weather was so crap all day on Friday, and then as we left work, the sun came out – what a miracle! I had a couple of old friends, Rob and Jim, coming over for dinner, and decided to cheat a bit and just do mezze-type finger food, and concentrate on the vodka martinis rather than spending lots of time in the kitchen. It took me just an hour to put everything together before they came round, and then we went for drinks in the courtyard for half an hour while the pastries were baking in the oven. We ate moroccan style humus (without tahini) and pitta chips, pastries with feta and spinach and moroccan-spiced lamb, and a greek salad. 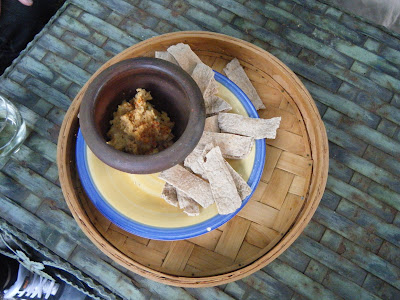 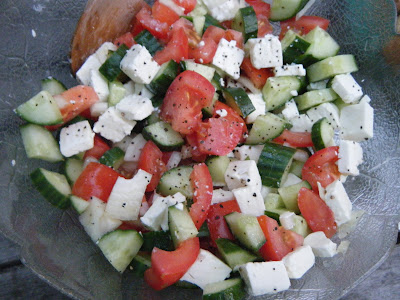 With the hummus, I just blended the chickpeas, lemon juice, salt and spices in a blender, slowly adding the olive oil into the mix. I wanted to use dried chickpeas originally, as I prefer their flavour, and even soaked some overnight, but then I realized that I would need to cook them for ages and promptly changed my mind. You may think I was being lazy, but it was a Friday night, and sometimes the priority has to be to have a good time! I cut the pittas into strips and stuck them in the oven for about 20 minutes on 100 degrees C, while waiting for my mates to come round. For the greek salad up there, I just used cucumber, tomatoes, feta and onion. Dressing was the simplest possible – lemon juice, olive oil, salt and pepper, which I put it on immediately before serving. When my friends arrived with the ice, I made dirty vodka martinis, with an unusual spelt vodka I picked up in Poland. I have recently learnt that I needn’t have spent lots of money on the vodka, because the best vodka martinis I have tasted, at Milk and Honey in Soho, are made with Wyborowa – a cheap Polish rye vodka – apparently the rye cuts through the brine really well. Still, mine were pretty good too. I make dry ones, so all you need is vodka, and olives in brine. They say you should never shake a martini, so I just stirred the vodka ice, and brine for a minute or two in the cocktail shaker, and drained into a chilled glass. I can’t say how much vodka and brine I used exactly – I like it quite dirty, so I’d say about 2 parts vodka to 1 part brine, but it’s entirely up to you 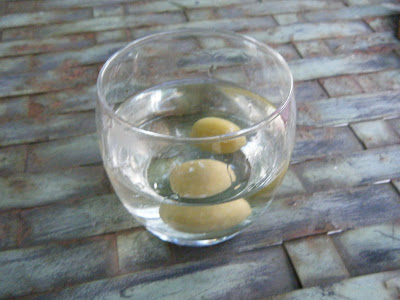 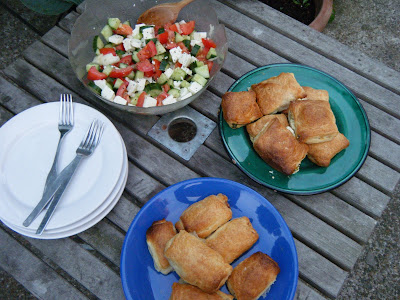 With the feta and spinach pastries, I simply shredded the fresh spinach and blanched it for 5 minutes. When you drain it, make sure you get as much water out as possible, by squishing it with a fork. Then put it in a bowl, with the lemon juice and feta, and keep squishing, adding the salt and pepper at the end. My Greek friend who taught me to make these folded them in little triangles, but I find that you don’t get that much filling in there, so I do squares – putting the mixture in the middle,  folding once over and sticking the sides together, into a pillow shape. For the lamb pastries, you brown the onion for about five minutes before adding the minced lamb and spices. You use a fork to break the meat up while it is cooking and it needs to cook for about 10 minutes. Then turn the heat off and pour over the beaten eggs. Use the same fork to push and blend the eggs into the lamb mix. Then allow to cool for at least 15 minutes. I was supposed to roll this into cigar shapes, however, wanting to put as much lamb in as possible they turned into sausage roll shapes. The thing with pastries is that anything goes really – as long as you get the filling right, they will taste lovely. I cooked them at 180 degrees C for half an hour. This recipe will make 24 pastries all together, which was way too many for just three people, but they are quite nice cold the next day too