04 May Another Polish recipe – spinach with fried egg

Posted at 17:47h in Uncategorized by zuzazak

Polish food has a reputation for being meaty and stodgy. This isn’t entirely unwarrented of course, but, there are many lighter, meat-free, lesser-known dishes, which I would like to bring to someone’s (anyone’s) attention. One of these is this spinach dish, which my mum used to always make for me when I was on a “detox”. Its not dairy or wheat free, but it is healthy, while not compromising in the least, on taste. If you would like to make this into a nutritionally balanced meal, you may want to consider some mashed potatoes to go with it. Today, I had it for lunch without mash, and found it satisfyingly filling. I also realised that I had thoroughly missed it. The ingredients below are for one person, and approximate, as I rarely measure anything 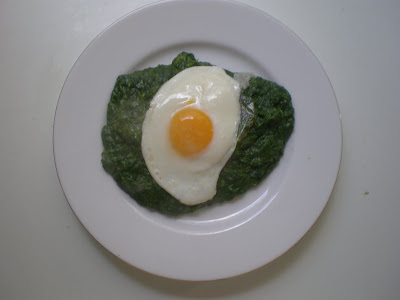 I started off by washing the spinach under running water, then braising it in boiling, salted water for 2 minutes. I drained it, pressing it down with the spoon, trying to get as much of the water out as possible, and blended it to a rough paste in my blender. On a frying pan, I made what is called a “zasmazka” – you use this base for many vegetables in Poland and it makes them taste distinctly delicious! My mum says it’s a kind of bechamel sauce but it is a bit thicker, as you can see in the photo up there. So, you melt most of the butter (leaving a bit for the egg) and sieve in the flour, stiring, adding milk to make the sauce into the consistency of a thick, smooth paste. I also added juices from the blended spinach, to make it a little bit more watery. Then, I turned the heat off. In the next step, we crush the garlic and mash it with a little bit of the salt – this is a mixture that’s used for many dishes in Poland, and we used it for the borscht in my last recipe. We mix the garlic mash-up into the spinach, and then add the spinach mixture into the “zasmazka”, putting the heat back on, really low. At this point, it’s time to start frying the egg on a separate frying pan with the remaining butter, and adding a little salt as usual. All the while it’s cooking, you need to stir the spinach, mixing it into the sauce thoroughly 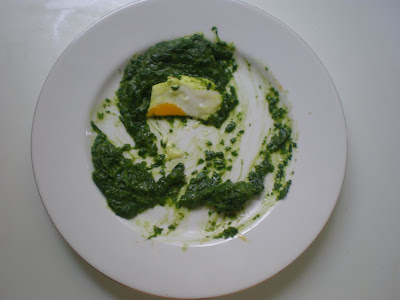 This dish is great as a lunch, or, as I mentioned before, with mash for a more substantial meal. Both veggies and meat-eaters love it in my experience, so I pretty much guarantee that you will not be disappointed. On a more personal note, I am getting through my break-up hell with a book, which I have to recommend to anyone who needs to be distracted, whatever the reason. A friend recommended this to me, and I have not been able to put it down all day – it’s called Shantaram – spread the word. It’s a true story of a good man that has been a heroin addict, an armed robber, a street soldier and a real soldier, a part of the Bombay mafia, a money launderer, forger and a Bollywood actor, and then wrote his story in jail, where it was destroyed twice. Despite my description, it is not depressing – it’s funny and honest and pure, somehow. Great for anyone who wants to forget their lives for a couple of hours a day, or about five in my case!
Ingredients
1 250g bag of spinach
20g butter
1 garlic clove
2tblsp salt
1tblsp plain flour
2 generous splashes of milk